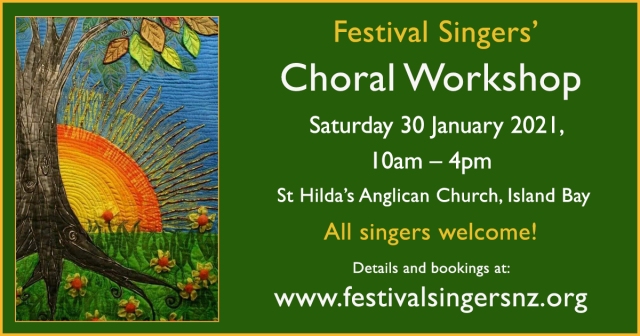 You will learn about:

Sheet music will be supplied. Benedictus from Dvorak’s Mass in D major, and a new piece by Jonathan Berkahn. Bring your own lunch. Morning tea provided.

Or bring cash on the day.

Please arrive no later than 9:50

10:40 – 11:40 How to approach a choral work – looking at the Benedictus from Dvorak’s Mass in D major led by Ingrid Schoenfeld

First we have the wonderful Chalene Scott, who has a Bachelor’s in Performing Arts but more importantly, has been doing theatre for almost all her life. She has done musical direction for many musicals, as well as devised movement and theatre pieces, and is excited to bring a tiny bit of theatricality to your day. She’ll be leading a physical warm-up to start us off.

William McElwee is in demand as a choral conductor and vocal coach, praised for his ability to get outstanding vocalism from choirs and to stretch them musically.  He has recently returned to Wellington from the United Kingdom, where he was Musical Director of the Collegium Singers in Taunton and the Yeovil Chamber Choir, Assistant Musical Director of Budleigh Salterton Male Voice Choir, Organist at Holy Family Church Honiton, and Singing Teacher at The Gryphon School in Sherborne, while maintaining a private teaching studio and singing as a Deputy Lay Clerk at Exeter Cathedral and Buckfast Abbey.

William trained as an operatic soloist at the New Zealand School of Music and New Zealand Opera School.  Recent highlights of his performing repertoire are the bass solos in Haydn’s Creation, Handel’s Messiah and Bach’s St Matthew Passion and the title role in The Marriage of Figaro.  Alongside his PGDip in Performance Voice, he holds a BSc in Mathematics and a BA in English and Latin with Honours in English Language.

Ingrid Schoenfeld is the musical director of Festival Singers.

If you are looking for a choir to sing with in 2021 we’d love hear from you.

Click here to order the album directly from us, or from Bandcamp 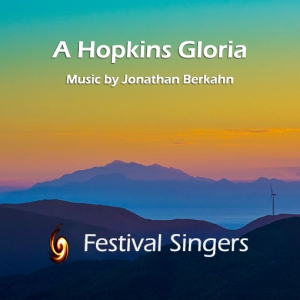 Here is Alexander Garside’s video about making the album.

Here is Alexander Garside’s trailer video about the album

A Hopkins Gloria was initially premiered at a concert that included two other Glorias, by Vivaldi and by John Rutter. In the back of my mind were Classical and Baroque “cantata-masses” like Vivaldi’s Gloria, where each fragment of the (Latin) text is spun out into a complete movement. I was tempted in this direction, but decided at length to set the text in English (mostly the version in A New Zealand Prayer Book) – partly because most of the rest of the concert was in Latin. And as soon as I had made that decision, I felt that I couldn’t repeat each clause indefinitely, treating them as tokens to fill out abstract musical designs, but had to regard the text (or at least larger sections of it) as meaningful wholes.

Then I had an idea. Gerard Manley Hopkins’ Pied Beauty (“Glory be to God for dappled things…”) came into my head, which I had attempted without success to set at various times over the last twenty-five years. I thought of ‘inhabiting’ this canonical text with other, related texts (“and the birds of the air shall make their homes in its branches…”). It occurred to me that one of Hopkins’ Terrible Sonnets, written out of his blackest depression, could make a useful counterpoint to the Agnus Dei sections; then I wondered if the second half of his “That Nature is a Heraclitean Fire and of the comfort of the Resurrection” might work as a way of bringing about a return to the joyful mood of the whole.

So there is a kind of spiritual drama, a dark night of the soul, at the heart of the piece. And it may be worth saying that the emotional dynamic of this section – the attempt to soothe and manage dark imaginings in the early hours of the morning by repetition of the Agnus Dei prayer – is, quite literally, something that has been a regular part of my spiritual life. I do believe, somehow, that joy will have the final word; but suffering and resurrection have to happen first. 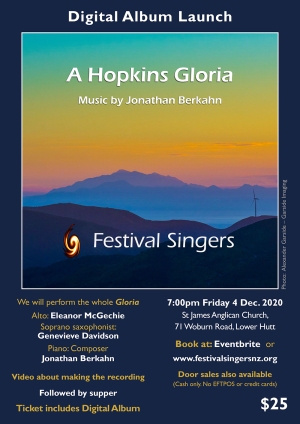 We performed the whole Gloria accompanied by
Alto: Eleanor McGechie
Soprano saxophonist: Genevieve Davidson
and the Composer on piano.

We also view a video by Alexander Garside
about the making of the recording.